The inception of the Lebanese American University began with two American missionaries, Sarah Huntington Smith and her husband Reverend Eli Smith, who traveled to Beirut in the mid-19th century. Huntington Smith’s mission was to establish the American School for Girls in Beirut, which she did in 1835, with the help of fellow American Presbyterian missionaries. The institution evolved into the American Junior College for Women (AJCW) in 1924 and then Beirut College for Women (BCW) in 1948. After other iterations, and after accepting men beginning in the 1970s, LAU achieved university status in October 1992. To honor this legacy as a school founded for women by a woman, LAU NY’s mission is to connect with thousands of alumnae who have emigrated since graduation to North America.

According to LAU NY Director of Alumni and Special Projects Ed Shiner, “At alumni homecoming events on LAU’s campuses, alumnae who graduated 50 years ago have been recognized and given a commemorative pin. I began to wonder how many such alumnae are in North America and do not return to Lebanon for this homecoming event. I was surprised to discover that there were over 200 who had graduated 50 or more years ago from either AJCW or BCW.  Reaching out to these women has been an enjoyable and revealing experience.” 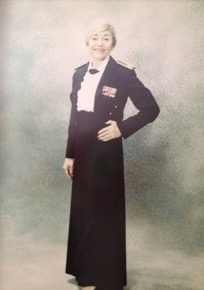 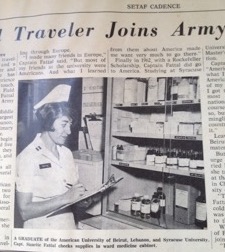 One of the thousands of women who graduated and continued onto an incredible life and career is Suzette Fattal-Blair, nurse, nurse practitioner and teacher. After graduating from BCW in 1951with an Associate of Arts degree, she received a Bachelor in Nursing from the American University of Beirut in 1954 and a Master in Nursing Education from Syracuse University in 1960 as a Rockefeller Scholar. In over 40 years as a nurse professional, she worked in the public, private and military sectors across the United States.

She served in the US Army Nurse Corps as an Ambulatory Care Nurse Practitioner at various military installations, including in Vietnam and in Egypt. In her long military career, she rose to the rank of lieutenant colonel and won many awards for her valiant service, including the Legion of Merit, medals of Meritorious Service, and the Bronze Star, among others. During her service she met her now-husband Dr. James Blair, an army hospital administrator. They moved around quite a bit with their work before permanently settling down in South Carolina in 1986.

Speaking with LAU NY about her experience at BCW, Fattal-Blair stated: “I only have the fondest memories of the time spent at BCW. Everyone who studied with me was smart, creative and elegant. This fostered an encouraging and enabling environment for my cohorts and me. For me, my years at BCW are what ignited the fire to continue my education, and, ultimately, focus on nursing and serving others. Those years laid down the stepping stone for the path I took in my life.”

Fattal-Blair’s experience goes hand in hand with LAU’s mission to provide access to a superior education for its diverse student body, and to continue to pay homage to pioneering women like Fattal-Blair who dared to dream big.

Share this:
Back to top What's New at LAU A Spark of Hope