The Red Cross saves thousands of lives a year. LAU is helping the organization retain its lifeblood - its volunteers

Every day of the week, dozens of orange jumpsuit-clad personnel at the Lebanese Red Cross (LRC) station in Hazmieh coordinate the dispatch of ambulances and provide basic first aid to patients at the station itself. The LRC is probably the most publicly visible national society in Lebanon, with several dozen stations throughout the country, manned by thousands of volunteers who work alongside a couple hundred staff, saving lives and responding to natural disasters as they occur. Yet few outsiders are aware of the partnership between the Lebanese Red Cross and the Lebanese American University, which has been meaningfully improving LRC’s capacity to carry out its mission.

“The passion behind our involvement comes from our strong belief that the work done by the Lebanese Red Cross is truly valuable,” says Assistant Professor of Management Studies Jamal Maalouf, referring to the project she is currently carrying out with Amine Abi Aad, her husband and fellow assistant professor at the Adnan Kassar School of Business (AKSOB). The LRC approached the pair in February 2017, asking them to conduct research aimed at improving volunteer retention rates.

“The selection of volunteers is not easy, especially in EMS (Emergency Medical Services),” says Secretary General of the LRC Georges Kettaneh. “Because we want volunteers who are accepted by the entire community, whether it be Tripoli, Sidon, Zahle, Jounieh or Baalbek,” and who can “give 20 to 30 hours of their free time a week.”

“The LRC used to take volunteers for granted,” says the organization’s Learning and Development Manager Berna Beyrouthy. “We trained them extensively, but didn’t pay much attention to the question of how to retain them.” Recently, however, “we have opened our eyes to this issue,” explains Abdallah Zogheib, the LRC Emergency Medical Services director. “We have the feeling that the lifecycle of volunteers is decreasing – it used to be up to ten years.”

Given the amount of resources that the LRC invests in training each new volunteer – according to Zogheib, the comprehensive training process takes up to two years – and the difficulty in recruiting committed individuals who are able to move easily within Lebanon’s diverse community landscape, the ability to retain experienced volunteers becomes crucial for the continuing success of the NGO’s work in Lebanon. Enter Maalouf and Abi Aad.

“Our role is to conduct a study using qualitative interviews, as well as gather quantitative data through surveys to try and understand the reasons behind these trends,” says Maalouf. The two researchers plan on administering a survey to approximately 800 current LRC volunteers, as well as carrying out smaller focus-group interviews with both volunteers and heads of the youth, EMS and disaster management centers. “We are very happy that 42 of the centers have agreed to participate, with good representation from all the regions of Lebanon.” They also intend to find out from those who left why they stopped volunteering.

According to Abi Aad, “We have a strong feeling the reason is burnout, but we won’t know until we have the data.” Once the survey and interviews are completed, the two researchers will analyze the data and provide the Red Cross with policy recommendations to achieve higher retention rates.

Maalouf and Abi Aad’s position as faculty at AKSOB makes them particularly well suited for the project. “First of all, it’s an HR problem,” explains Maalouf. “The scholarly literature in the business field has relied on insights from studies on Human Resources to solve problems of volunteer management.”

Furthermore, one “can look at this issue in terms of employee retention and burnout, which is part of management,” says Abi Aad. “The LRC is a national society, where performance is measured not in terms of money but in terms of how many people in need they help. And this is directly related to the number of volunteers that they have – making it a managerial problem, too.” 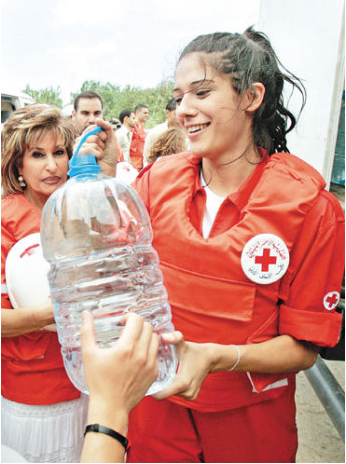 The Red Cross-LAU volunteer-retention project is the second major joint effort between the two institutions, which a few years ago signed a Memorandum of Understanding enshrining a partnership that continues to evolve. The initial project, still ongoing, began with a series of serendipitous events.

“One day, Abbas Tarhini [assistant professor of information technology at AKSOB] said to me, ‘You know, I’ve been thinking about ambulances and how they often get stuck in traffic in this country,’” says Jordan Srour, assistant professor of Operations Management at AKSOB. “And since my background is in transportation and engineering, I agreed that we should do something about that.” Through previously existing contacts with the LRC, Srour asked if the international NGO might be interested in collaborating to reduce ambulance travel time. 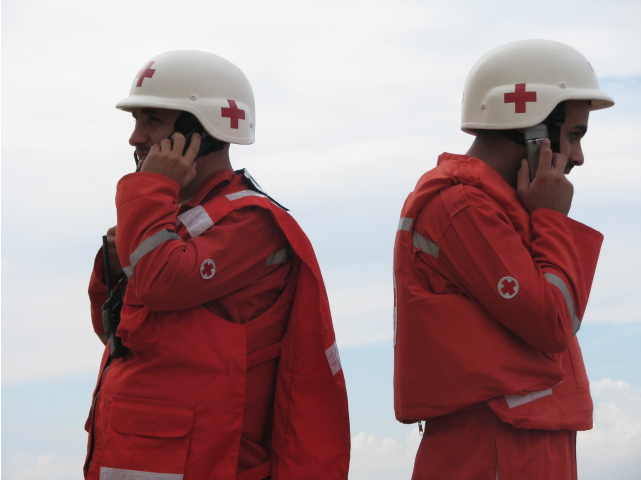 Again serendipitously, the LRC “had just started with a new dispatch system, a new way to receive calls and dispatch ambulances,” says Srour. With the new system came reams of data, which the LRC was happy to turn over to Srour and Tarhini for analysis, relying on their expertise to determine if any of the new information could be used to improve emergency response.

“The first thing we figured out was that there were a lot of problems with the data,” mainly with the correct recording of timing, says Tarhini, “For example, we would see that they got a call at 8 o’clock and the ambulance was recorded as having left at 7:50.” Poring over the data, Tarhini and Srour realized that the synchronization between devices being used by the dispatch system was not correct, that is, the clocks were talking past each other. With this new information, the LAU team worked with their LRC partners to fix the error, an endeavor that has had resonance outside this particular partnership.

“So far, our work with the Red Cross has resulted in three conference papers,” notes Tarhini. “The reaction has been fascinating,” adds Srour, “because within businesses, most analytics focus on cost, financial records, etc. But no one notices the timing, and given that there’s all this talk of the Internet of Things – with smart cities and everyone being interconnected – if everything is running off unsynchronized clocks, this could create significant problems.”

For the Red Cross itself, the discovery of the synchronization problem was “a major contribution, because we now know what the gaps are, and what we need to improve,” says Hassan Saad, LRC dispatch project manager. “This is then linked to our higher objective, which is improving patients’ access to quality pre-hospital emergency care.”

While both the volunteer-retention and emergency-response projects are significant and ongoing (the next phase of the latter is to use the new-and-improved data to predict response times), they are not the only areas in which LAU contributes to the mission of the Red Cross. Outside the parameters of the Memorandum of Understanding, enterprising students have been inspired to follow in their professors’ footsteps both by volunteering through the youth chapters and by proposing concrete solutions to the challenges facing the organization.

This past year, two senior Computer Science students, Hussein Ali Ahmad and Ali Hamad, created a “First Responder” application within the context of their senior Capstone Project, under the direction of Sanaa Sharafeddine, associate professor of Computer Science at LAU.

“As an LRC volunteer, I was aware that the Red Cross faces problems in arriving quickly because of lack of resources,” says Ahmad. So the students came up with “the idea of creating an app for a community of First Responders” linking the dispatch room with responders already within the immediate vicinity of the emergency.

While still a prototype, the “First Responder App” has the potential to save lives, says Sharafeddine. “In the event of a cardiac arrest, without early intervention the chances of long-term survival decline by as much as 10 percent per minute,” she cautions.

In the end, the partnership between LAU and the Lebanese Red Cross serves as a model for university engagement with society. From the LRC’s side, “the results of the joint projects so far have been very positive, with a high impact,” says Kettaneh, serving, in his view, as a good example of what can happen when organizations work together with academic institutions.

Srour agrees. “It’s amazing how open-minded the Red Cross is, and willing to listen to what we’re saying as academics, see value in it, and change their systems based on what we’re telling them,” she says. “It’s very rare to find academic-real world partnerships that work so well.”

Share this:
Back to top Helping People Live Their Best Lives What's New at LAU