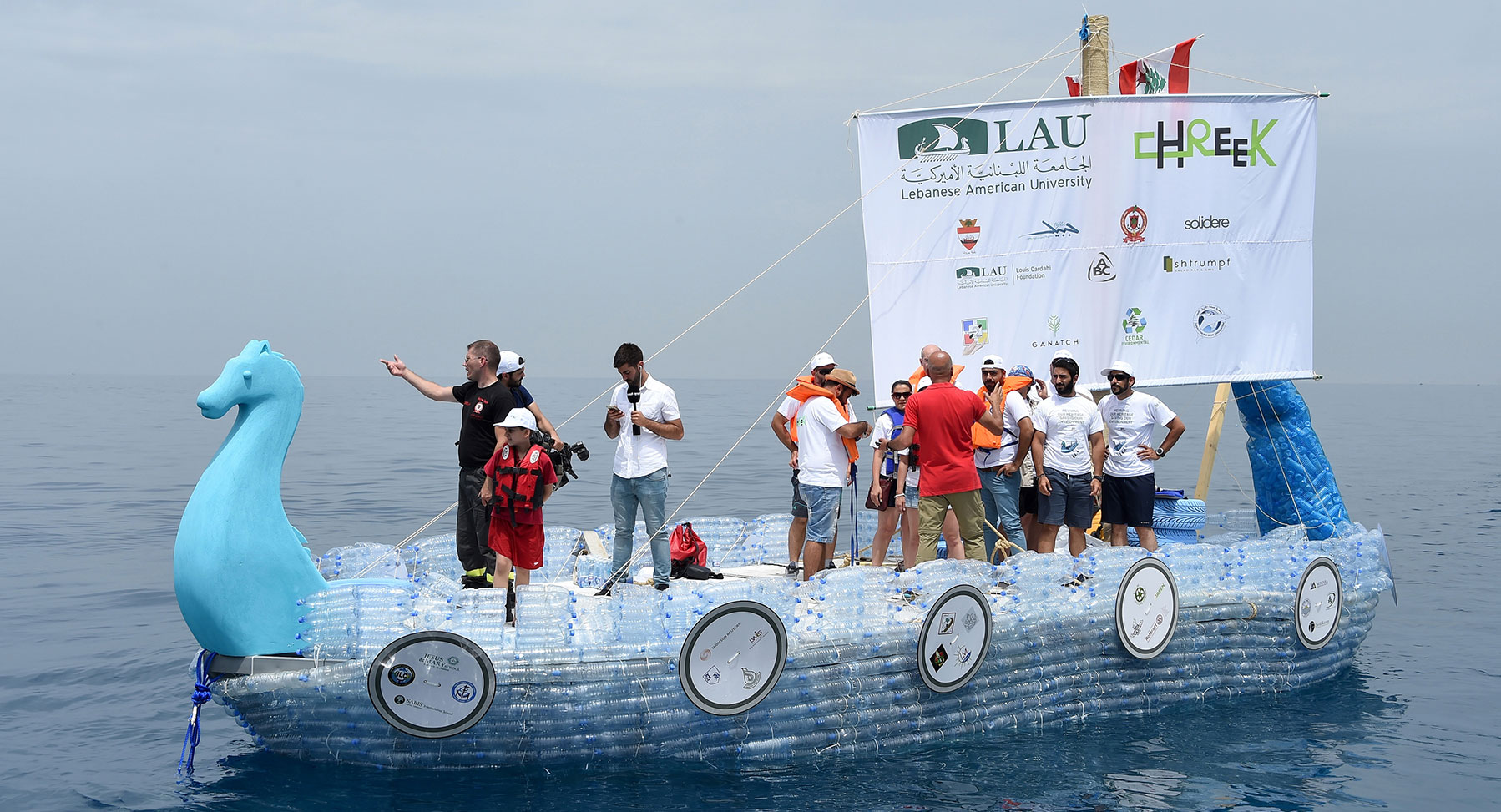 The Trireme Rides the Tides

When we join hands to get something done, we can do the impossible."

The historic Phoenician sea route got a highly anticipated revival on Sunday, April 20. Sailing across the coastline from the ancient port in Byblos to Beirut’s Zaitounay Bay was the world’s first upcycled replica of a Phoenician trade ship, called a trireme, built mostly out of plastic bottles by LAU and high-school students in partnership with Lebanese environmental NGO Chreek, and with the support of municipalities, businesses, NGOs, communities and schools.

“Upcycling is the only hope for Lebanon’s garbage problem,” shouted Chreek CEO George Ghafari from on board the trireme as it neared its docking spot in Zaitounay Bay. Dozens of people cheered the ship’s arrival, including LAU President Joseph G. Jabbra, Dean of Students on Byblos campus Makram Ouaiss, Assistant Dean of the School of Engineering Barbar Akle, environmental activists, members of the Lebanese press, as well as passersby, young and old, who gathered to witness the extraordinary sight.

With no access to clean tap water in Lebanon, more than 500,000 plastic bottles are disposed of every day — most of which end up in landfills in the absence of government-run recycling plants. While it took months of joint efforts from municipalities, schools, NGOs, businesses and the LAU community to collect 100,000 plastic bottles for the initiative, the project proved achievable.

“When we join hands to get something done, we can do the impossible,” said Byblos Campus Activities Associate Manager Alan Kairouz, who managed the project. He thanked all the different entities that took part, and pointed out that the project’s success is proof that the Lebanese can work together to save the environment, adding that “it is our duty to work for future generations.”

The ship, which stretched 13 meters in length and four meters in width, took five months to build, with over 350 volunteers — including LAU students, faculty and staff, school students and scouts — working during weekends and holidays. LAU’s School of Engineering worked on the design, ensured buoyancy and conducted safety tests, while the Communication Arts Department filmed construction from start to finish.

Jabbra declared LAU the “innovation institution par excellence,” encouraging Lebanese leaders to pay attention to the hard work that young people have put into achieving the impossible. He went on to salute the students who saw a problem, thought of a creative solution, and put it into action. He also thanked those who helped along the way, from the Lebanese Civil Defense to the Red Cross and Chreek, as well as every institution and person who took part in the project.

Akle offered a behind-the-scenes look at how the trireme was created. “A group of mechanical engineering students, led by fresh graduate Rifaat Sarout, carefully designed and built the ship, making sure that it could handle rough waves through a series of tests.” He added that the students were careful to not let any bottle go to waste in the process.

Six hours before the ship’s arrival in Beirut, its launch was celebrated at the historic port of Byblos, where people gathered to witness the event, including Ali Samad, a delegate from the Ministry of Culture, Byblos Mayor Wissam Zaarour, Head of the Marine Rescue Unit at the Lebanese Civil Defense Samir Yazbeck, as well as Ghafari, Jabbra and a group of LAU faculty, staff and students.

LAU’s own recently inaugurated Louis Cardahi Foundation offered information about the ancient route that the Phoenicians’ triremes traveled along the coast, one of many examples of how the different supporting entities came together to truly revive our heritage while protecting our environment.

Share this:
Back to top A Dual Welcome Finding "Home" in a Brand