The MUN, MAL and MEU have been a powerhouse of pedagogical, cognitive and leadership progress.

A staple of student leadership across the country, LAU’s simulation programs have grown exponentially since 2005. They are led by the university’s Outreach and Civic Engagement (OCE) Department, which is gearing up to add one more: The Model African Union (MAU) this year.

At the end of spring 2019, OCE recognized the top delegates from the Model United Nations (MUN), Model Arab League (MAL) and Model European Union (MEU), at a special ceremony on Beirut campus.

Assistant Vice President for OCE Elie Samia declared that “we have built bridges for optimism, connection, and diplomacy, from Sidon, to Beirut and Byblos and all the way to New York City.”

Samia further commended the middle- and high-school delegates for well-earned 569 awards as well as 212 university scholarships throughout the academic year. He called on them to embrace the age of “SMAC: that is, you becoming Social, Mobile, Analytic and Cloud – meaning digitally connected.”

Each of the three secretary generals touched base about the collective efforts it took to reap success, and recognized members of their secretariat and student awardees for their hard work. 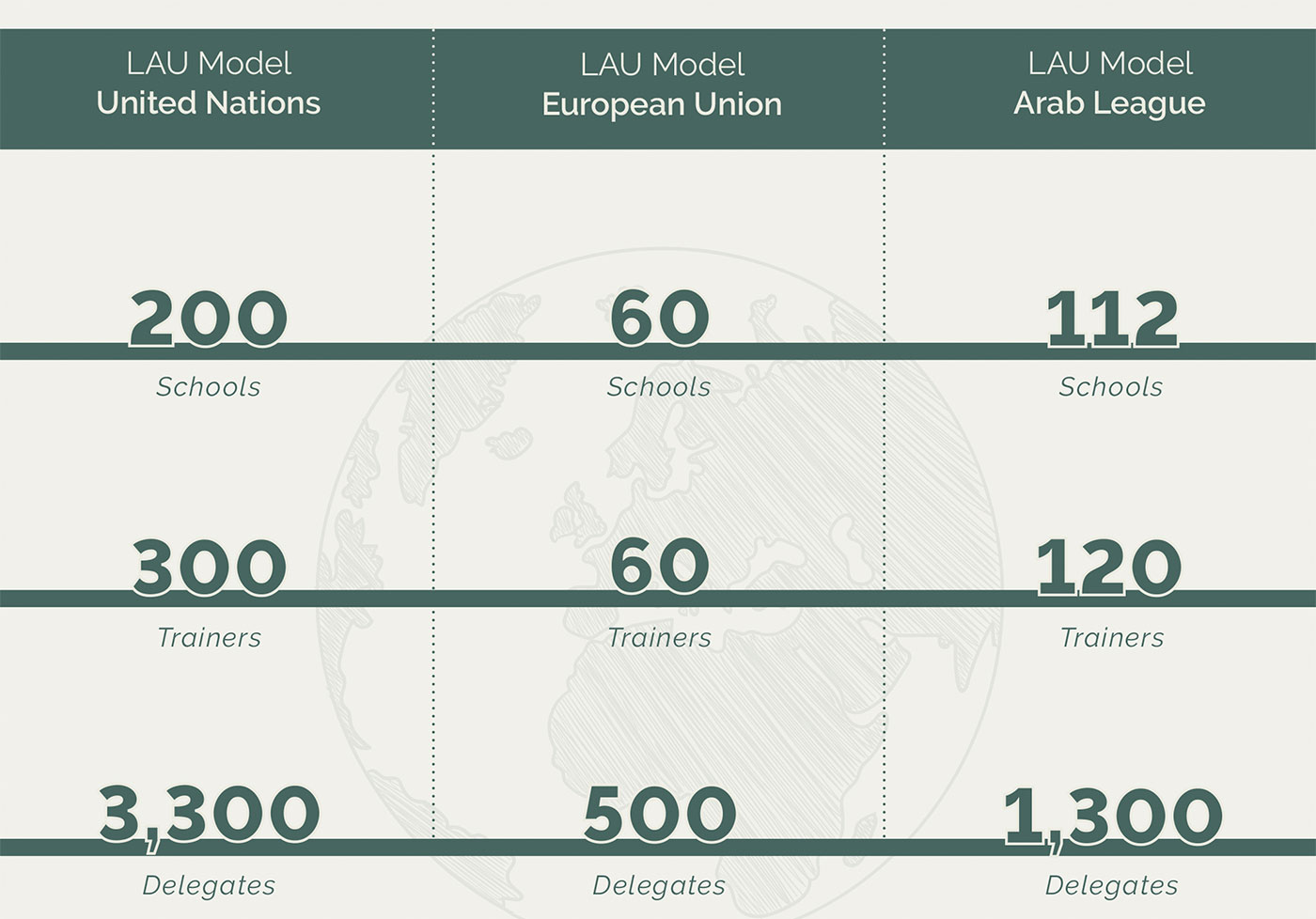 The program with the highest reach, and the biggest MUN cohort worldwide, Global Classrooms LAU MUN trained 3,300 students this year on both campuses under the slogan “We Believe in YOU(TH).” Secretary General Alec Hagopian thanked advisors for “having faith in student leadership,” and affirmed that for a program that “loves to fall in love with problems, it has inspired students to come out with innovative solutions of their own.”

For MAL, the theme for the year was Reviving Arab Leadership and has included 1,300 students who trained at LAU Beirut and the LAU Outreach and Leadership Academy (OLA) in Sidon. Secretary General and LAU alumna Maya Makarem (BS ’19) spoke in Arabic in line with the program’s call for preserving the Arab identity. She dubbed the simulation programs “a school of thought” that leaves a mark of civic responsibility on each of its veterans, who turn the lessons they’ve learned into life-long convictions.

As for MEU Director General and industrial engineering major Mohamad Ali Kalassina, every single region in Lebanon has potential to become “a standard for diplomacy, an example for democracy, a hub for diversity, and a stage for development.” This year, MEU ran its training in both English and French across both campuses and trained 500 delegates.

Share this:
Back to top From Lebanon to the World LAU Nurses Tend to their Profession in Lebanon