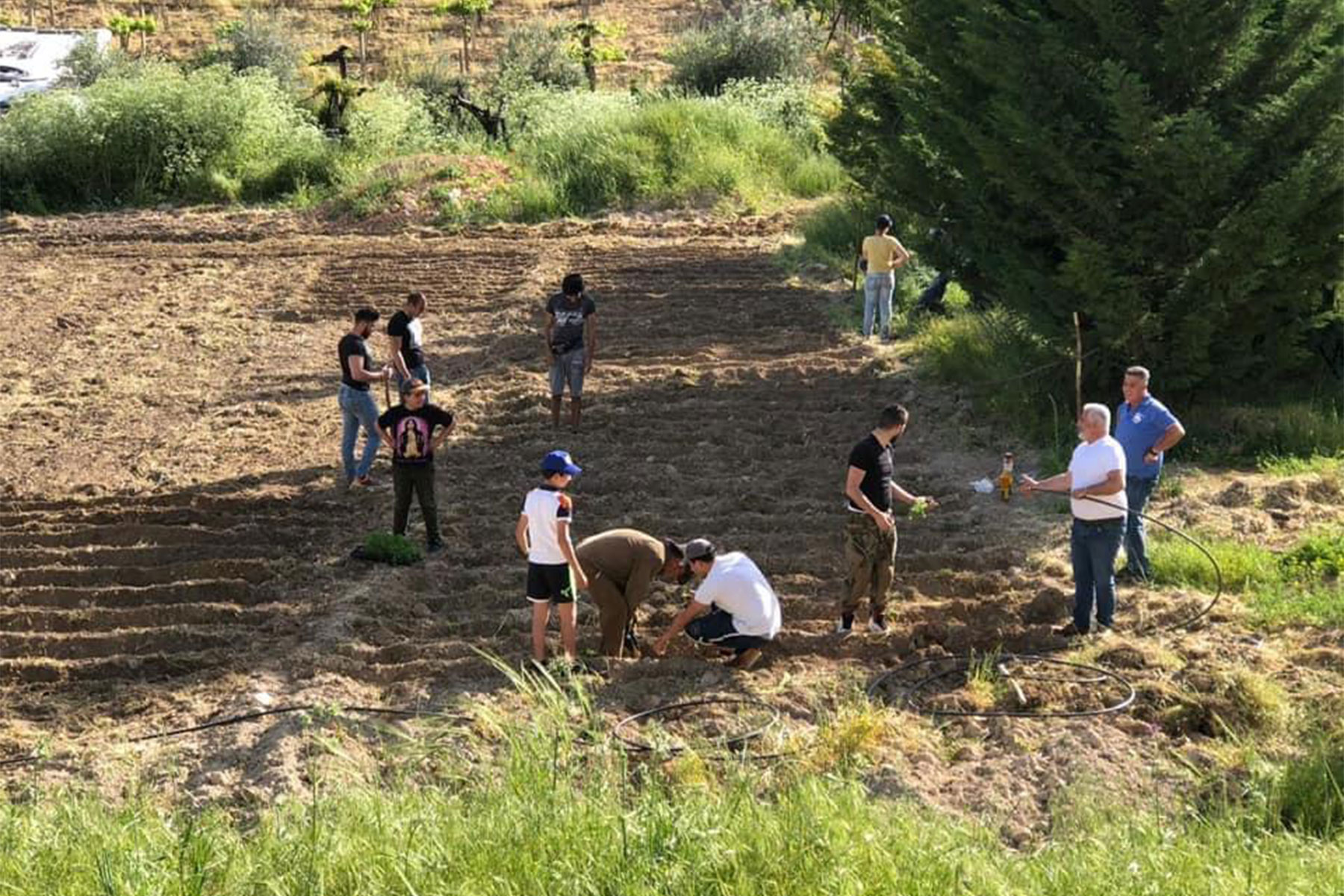 Can Lebanon Be Saved from the Looming Food Crisis?

Faculty and students weigh in on the challenges and ways of avoiding a major food crisis in Lebanon.

Food insecurity is not novel to Lebanon. During the First World War, more than 200,000 citizens lost their lives to the Great Famine of Mount Lebanon while others suffered from severe food shortages under the Vichy government in the Second World War.

Today, all pillars of food security seem to be at risk again. While very few agro-industries in Lebanon are entirely locally based, pressures from restrictive monetary policies and the dollar shortage – coupled with the significant hike in prices – indicate the crucial need to invest in our Made in Lebanon brand.

Records over the past 10 years show that agri-food imports have slightly increased, reaching around $1.6 billion in 2019, according to a 2020 factbook released by the Investment Development Authority of Lebanon (IDAL). This year alone, imports decreased by 24 percent since the start of the US dollar crisis toward the end of 2019. 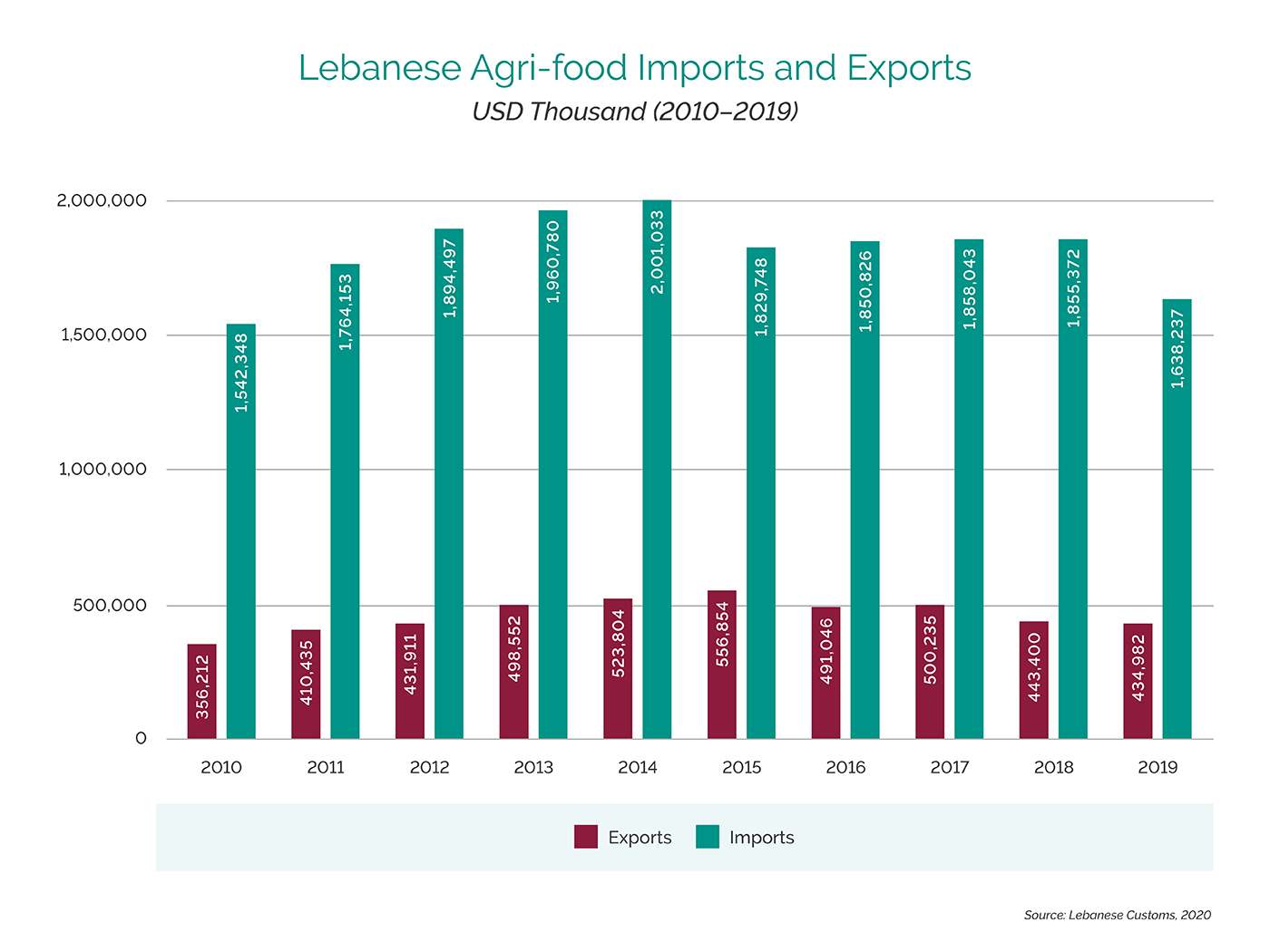 “Imports have collapsed, and the prices of imported food have substantially increased after the de-facto devaluation of the Lebanese pound,” says Dr. Walid Marrouch, assistant dean of Graduate Studies & Research and associate professor of economics at the Adnan Kassar School of Business (AKSOB). “Hence, old concerns about food security are resurfacing as substitute locally produced food will not be affordable due to the high cost of production and limited geography.”

Lebanon, in fact, cannot produce enough food to feed all its population due mainly to “its high density and mountainous topography,” says Dr. Marrouch, in addition to the basic practices and outdated techniques used within the agricultural sector. Alternatively, it can rely on initiatives bound to limit the import of goods, which could in the long run serve as an opportunity for local manufacturers to work on imports substitution and expand production. Click on either diagram to preview a larger version.

This can be achieved by “requiring the central bank to control the money supply and maintain a proper oversight of the banking system,” states Dr. Marrouch. “But most importantly, the central bank must be shielded from government interference, which hasn’t proved the case in Lebanon so far.”

From an economic perspective, there is a pressing need to invest in essential infrastructure, such as roads, telecom, airports, sewage grids, ports and power grids, meaning that the government must create conditions conducive to promoting growth, employment and price stability for all economic sectors.

“A government trying to engineer specific economic outcomes across all markets is bound to fail,” states Dr. Marrouch. However, investing in infrastructure and reforming institutions “can create the common denominator conditions for a prospering economy that offers economic growth and provides an ecosystem for industries, including the agro-industry, to thrive,” adds Dr. Marrouch, “which will translate into an improved ability to export Lebanese products and services abroad.”

On the individual level, the Lebanese are taking matters into their own hands. From growing crops themselves to promoting homemade goods via social media, they hope to ensure a more stable local economy that does not fully depend on external factors. 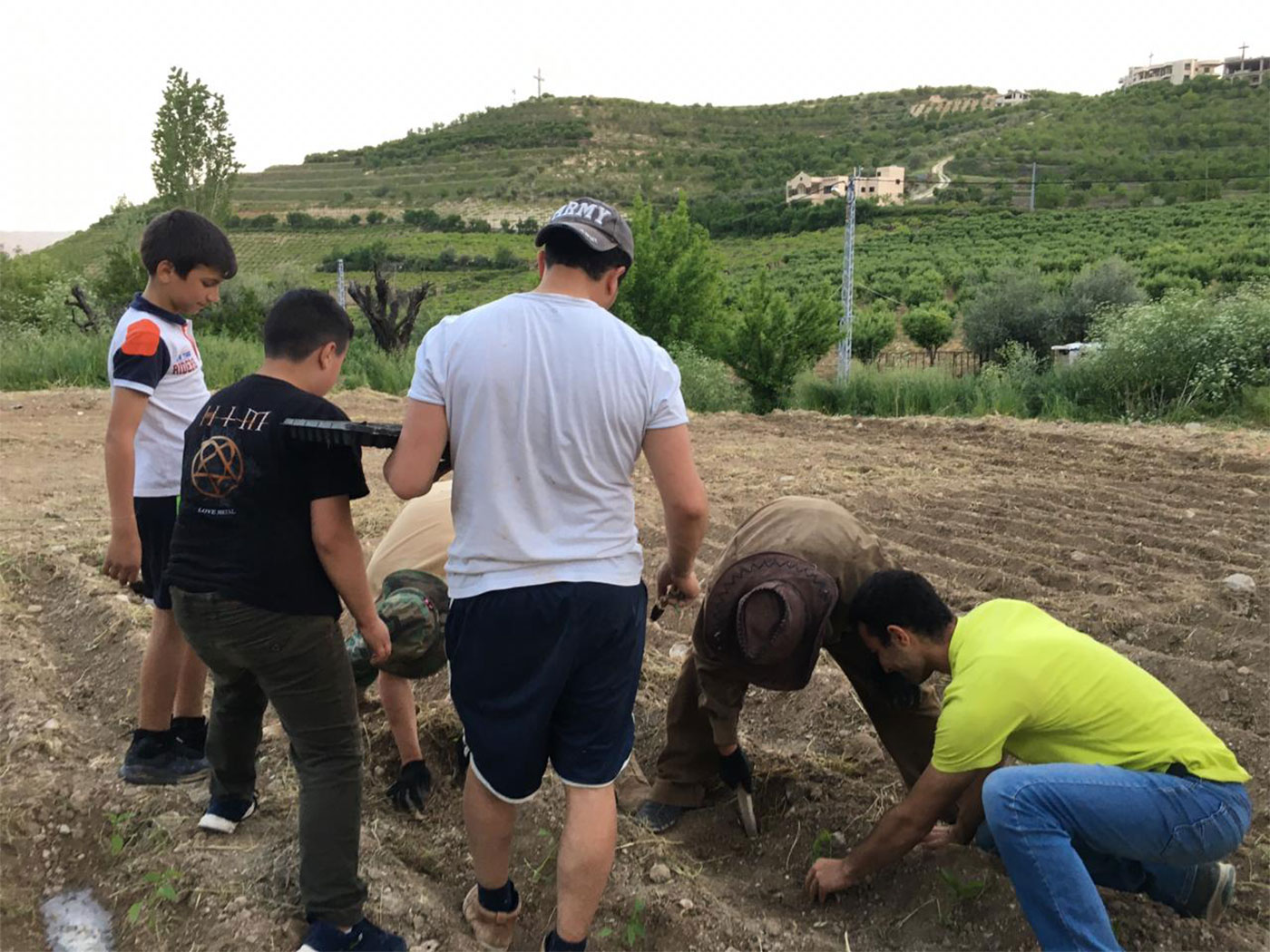 Looking to achieve a higher level of self-sufficiency in his hometown, alumnus Dr. Elie Najjar (MD ‘15) who specialized in orthopedic surgery at LAU Medical Center-Rizk Hospital, launched a team project to plant around 1,500m² of wasteland in the village of Niha donated by the church. Around 30 youth are collaborating to cultivate the land, find solutions to irrigation issues, provide plants for free and plan the distribution of products to the community.

“We won’t wait for anyone to help us,” says Dr. Najjar. “With small seeds and tiny green plants, we will plant a whole village. This is not an easy job, but together we will make it work.”

Self-sufficiency, however, is not a desirable outcome in any open economy, says Dr. Marrouch. “At any cost, it precludes the country from trading with other countries that might have relatively cheaper factors of production such as labor and land.”

On the governmental level, a wiser policy would be exploiting comparative advantages to specialize in high value-added and non-land intensive crops like vineyards, avocado, strawberry and kiwi fruit.

“This would boost exports and provide hard currency to import food items,” he explains, provided the basic infrastructure is in place so that Lebanese producers and entrepreneurs are able to capitalize on such advantages. 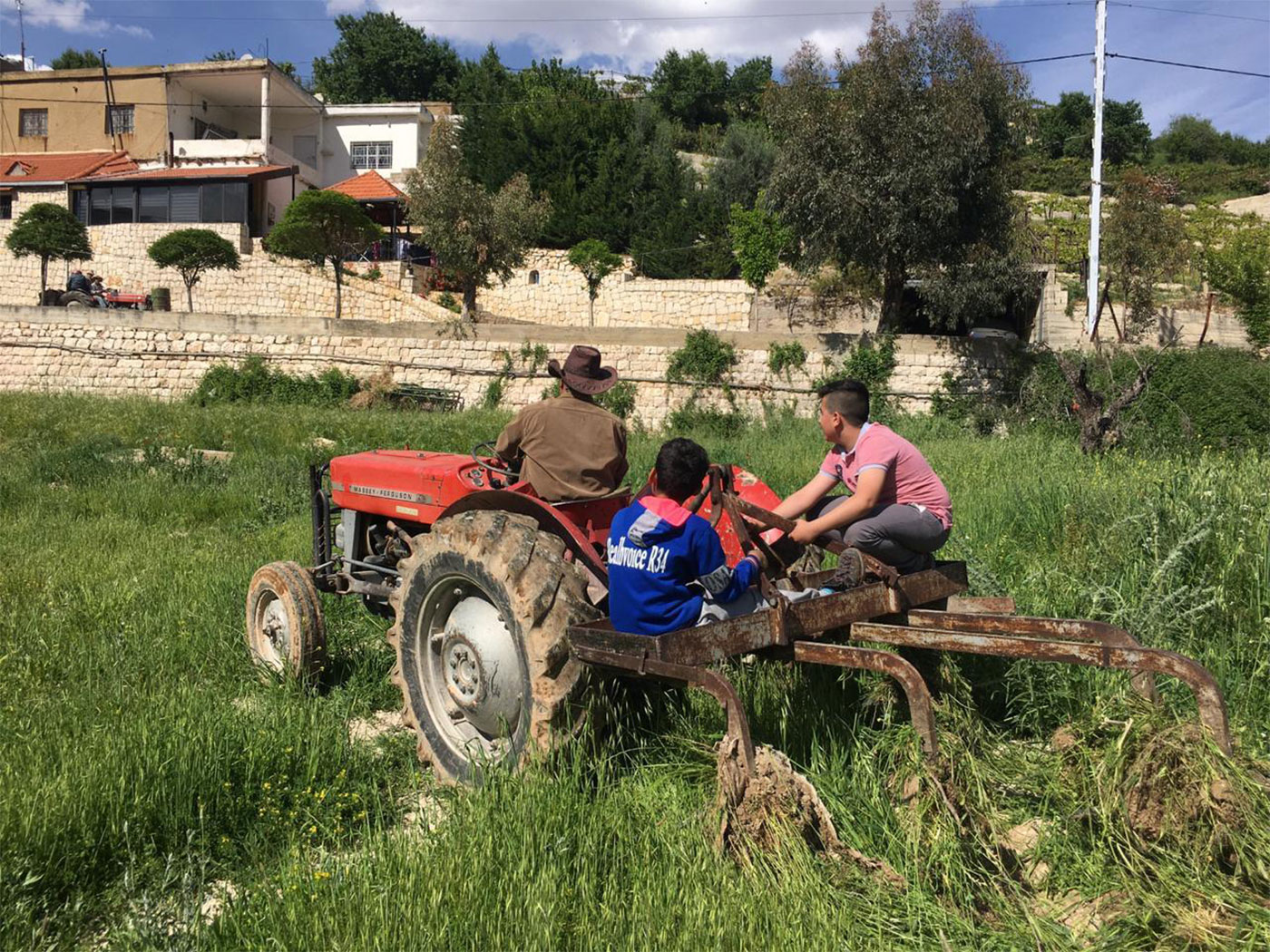 Back in 2018, the Lebanese agricultural sector contributed $1.8 billion to the total Gross Domestic Product (GDP) and employed 4 percent of the Lebanese labor force, according to the 2020 IDAL’s factbook. Although actual growth rates between 2010 and 2018 were relatively low, a sustained agricultural growth is “crucial to uplifting the quality of living as well as generating high revenues,” the report adds.

Moreover, people and companies are relying more on social media, especially during such times. Lebanese are promoting their own or others’ indigenous food products to highlight lesser-known and high-quality products, while large businesses are dedicating parts of their platforms to encourage small to medium enterprises.

Stressing the importance of social media as a facilitator between brands and consumers, Assistant Professor of Marketing at AKSOB Zahy Ramadan believes that the social media bandwagon has been actively sought as a cost-effective and easy channel to reach end consumers.

Yet, “most brands are still using a traditional approach whereby they’re considering it as a mass advertising tool instead of building socially interactive relationships,” he says.

As for the best way to promote a brand, companies must focus on the experience of building the brand-consumer relationship. “Creating, maintaining and enhancing relationships with consumers are considered to be highly beneficial for both customers and firms,” explains Dr. Ramadan. “Indeed, consumers are more likely to consider a brand that matches them so that they can express themselves fully and authentically.”

An initiative with a long-term view developed by alumni Elie Haddad (BS ‘20) and Mohamed Khanafer (BS ‘19), could be a step toward building a more sustainable agri-food industry.

Tamweel, a peer-to-peer lending platform, aims at providing local businesses and factories with access to funds, mainly from Lebanese and Arab institutions.

The initiative benefits both producers and industrialists. While farmers are looking to expand their current facilities to meet the increased demand for local products, manufacturers will be able to pay old loans contracted before the banking crisis.

“Our platform unites local investors willing to pay for the capital funds needed by the business owners to make payments within Lebanon, and regional lenders willing to provide fresh dollars to business manufacturers seeking to import raw materials for them to process and export it regionally or even globally,” explains Haddad.

Now that the transfer and adaptation of new technologies in the agriculture sector are still at an early stage, they remain restricted to individual initiatives.

In that sense, Tamweel will help funding farmers in need to invest in new technologies like hydroponics or vertical farming. Such technologies could allow them to “substantially increase their crops using the same land areas while decreasing water consumption by as much as 90 percent if properly implemented,” says Khanafer.

Plans to establish partnerships with companies specializing in hydroponics to help local farms transform their traditionally established premises into hydroponic ones are also underway.