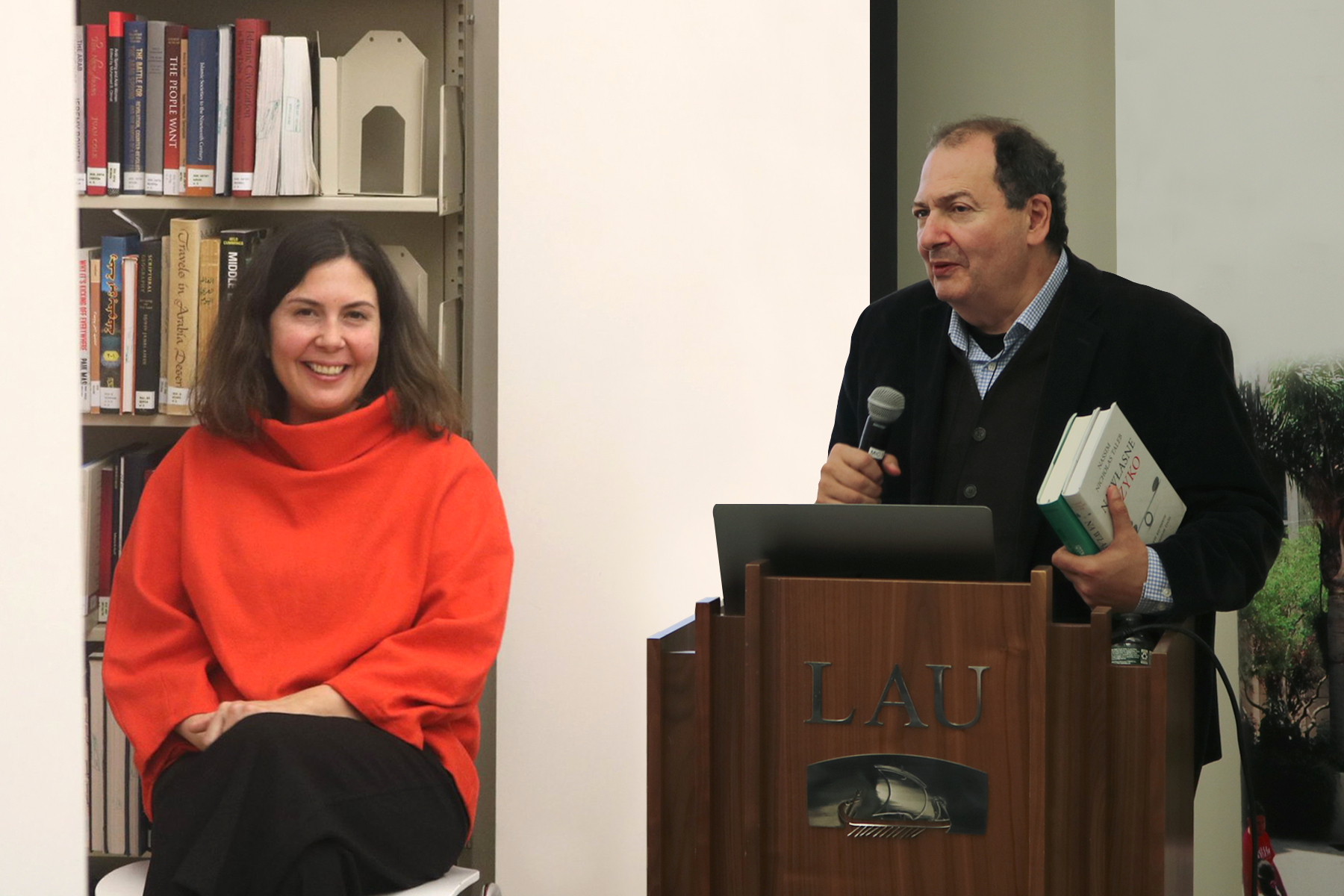 LAU NY as seen through the eyes of Executive Director Nadim Shehadi and Assistant Vice President of Development Nadya Mikdashi.

Since LAU New York Headquarters and Academic Center (LAU NY) opened its doors in 2013, it has served as a hub for the exchange of ideas, promotion of cross-cultural engagement, and the establishment of a meaningful relationship between the educational, policy and arts sectors in New York City.

In 2019, critical positions were filled by Nadim Shehadi who took over as executive director of the academic center and by Nadya Mikdashi as the assistant vice president of Development for LAU NY. Prior to joining LAU, Shehadi was the director of the Fares Center for Eastern Mediterranean Studies at The Fletcher School of Law and Diplomacy, Tufts University, and Mikdashi a co-founder of Skoun Lebanese Addiction Center, a non-profit that has pioneered community-based treatment for substance abuse and evidence-based drug education in Lebanon.

LAU Magazine sat down with them to ask them about the center, what the COVID-19 pandemic has meant for them, and what the future might hold for LAU NY.

How did you come to learn about LAU’s revamped presence in New York?

Nadya: I had been in contact with LAU NY as a small office. After the establishment of the academic center, I was extremely curious to find out what they were doing. I thought LAU had taken a bold step in expanding with a New York Academic Center.

Nadim: I knew of LAU NY of course, I was invited by the founding director Dr. Lina Beydoun, to give a talk at the center in 2016 in a panel on Lebanese migration, and we organized a joint conference with the Fletcher School in 2017 (where I was at the time) about immigration to Boston. But I also have a long history with the university when I used to act in student productions at the Gulbenkian Theater with the legendary teacher Irene Faffler.

Nadya: For me, LAU is part of my family. My sister and brother both graduated from LAU and my father is the former dean of the business school.

What was your plan for LAU NY before COVID-19?

Nadya: First, I was excited to meet the staff and to discover all of these people who were dedicated to a university tens of thousands of miles away. It was also great to start at the same time as Nadim, to see how we can overlap and support each other and be part of a revival phase. On the personal level, I liked to have the ability to fundraise for LAU NY. Though it is quite challenging to build new relationships across North America, it does offer many opportunities in terms of partnerships and fundraising. Overwhelming, but also exciting prospects for LAU.

Nadim: LAU NY has a huge potential in line with LAU President Joseph G. Jabbra’s brilliant vision of having a branch in the US that acts as a bridge with the region.  This has never been more needed.  We are gradually engaging different sectors and expanding the network beyond the usual constituencies. Currently, it caters mainly to alumni and Arab-Americans. We are an American institution as much as we are a Lebanese one and have been engaged in both for almost two centuries. In New York, you have the UN, Wall Street, the corporations, the art world, Broadway, academia and think tanks, but we are not limited to the city nor to Lebanon, we aim to collaborate with many regional institutions.

How has LAU NY managed the crisis?

Nadya: Just when we were starting to get our feet wet, plant ourselves, and prepare to take off, the pandemic occurred. This was problematic for fundraising, which entails engaging corporations and businesses. But we are no different from all other universities today that are facing this setback. We are focused on saving our students who are affected by the pandemic and on the fact that Lebanon is experiencing a financial meltdown. We are trying to shift to virtual fundraising, but we have to optimize our game on that level.

Nadim: Two aspects; we were already trying to adjust to a crisis in Lebanon before COVID-19 happened and then we shifted our programming entirely online. We are planning to remain online for at least a year and adjust to virtual life. This process actually brought us closer to Lebanon; we are now more in touch with our colleagues there, and we have more joint projects.

What are your current goals?

Nadim: Apart from losing weight, we aim to take full advantage of the virtual world where we will exist for the next year or so. The opportunities are huge, especially for international collaboration. We are a very dedicated team, aware of our responsibilities to serve the university, the country and the region.

Nadya: We are indeed a team in New York. There is no divide between the academic center and development. There is a crossover between fundraising and programming. We are trying to raise the profile of the university. We want to broaden our network of supporters.

Where do you imagine LAU NY to be in five years?

Nadya: I would like LAU NY to have a stronger presence and a wider community across America so that it may be a conduit for collaboration with the private sector and academic institutions. Our presence in New York also opens many doors for developing projects with foundations here to enhance the research and teaching functions of LAU.

Nadim: As a thriving academic center, an ideas hub, that serves both the Middle East and the United States. Where states have failed, institutions like ours can succeed in enhancing relations that transcend politics between the two societies. An American liberal arts education teaches universal values that need to be promoted both in the US and the Middle East. We used to be considered as an American soft power in the Middle East, and that can also work the other way, as a Middle Eastern soft power in America and beyond all borders.

Share this:
Back to top ARCSON Student Steps Up for Community Health Campus Notes