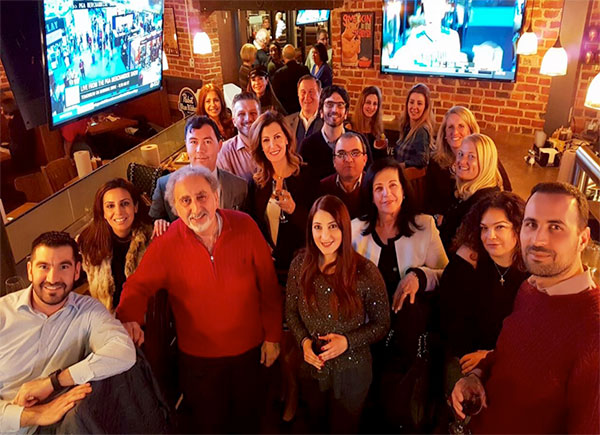 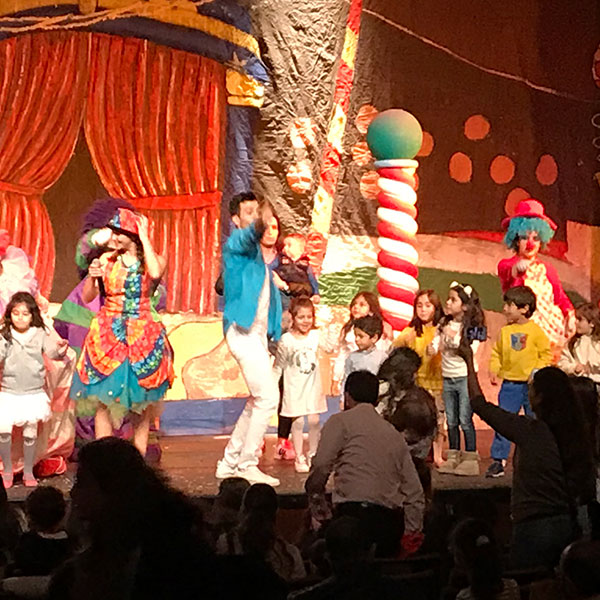 Dozens of children gathered on Beirut campus February 24 for an afternoon with characters from the Lebanese show Mini Studio, who had the kids dancing, singing and playing on stage.

In collaboration with the Institute for Women’s Studies in the Arab World, the Alumni Relations Office hosted a screening of the film Nour, which deals with child marriage, on February 26 in Beirut. Also present at the screening were LAU President Joseph G. Jabbra and the film’s director, LAU alumnus Khalil Dreyfus Zaarour, who was presented with the Alumni Award of Excellence. 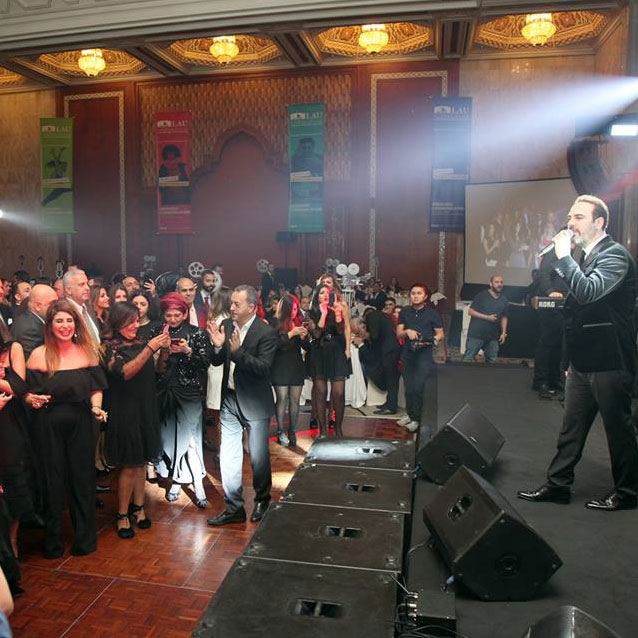 The first day of March, the Abu Dhabi Chapter held its 25th annual dinner at the Rotana Beach Hotel. Guests partied the night away at one of the biggest gatherings of the year. 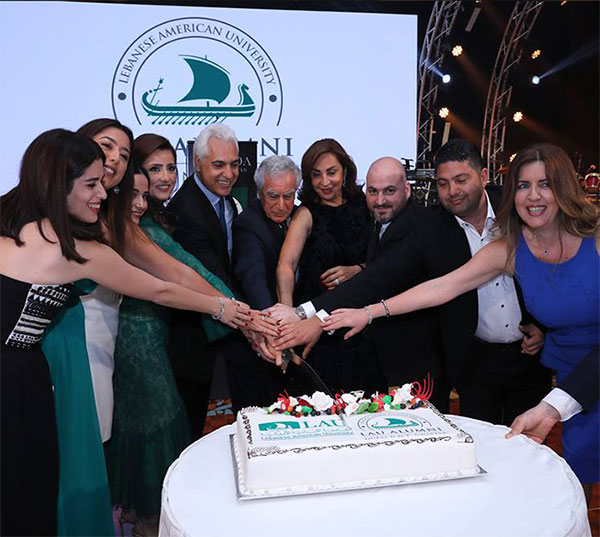 A day after the Abu Dhabi Chapter’s big gala was Dubai Chapter’s. hundreds gathered at the Roda Al Bustan Hotel in Dubai for its 40th annual gala on March 2. Like every year, the event was a great success!

Alumnae of Beirut College for Women – the name of LAU until it intergrated men in 1973 – gathered for a screening of Finding Your Feet, a British romantic comedy, on March 7.

On March 2, the Kuwait Chapter organized its 11th annual Open Day. Attending from Beirut were Associate Director of Alumni Relations Ghada Majed, representing the Alumni Office, in addition to former president of the Kuwait Chapter Youmna Salame and former president of the Alumni Association Board Leila Dagher. More than 400 alumni with their families and friends enjoyed the party!

What’s New Down Under

LAU welcomed its newest alumni chapter about as far from Lebanon as possible – in Sydney, Australia! Graduates living Down Under celebrated the launch on March 6 in the presence of President Joseph G. Jabbra, Senior Advisor to the President for Public Affairs Christian Oussi, Assistant Vice President for Alumni Relations Abdallah Al Khal and other LAU representatives. 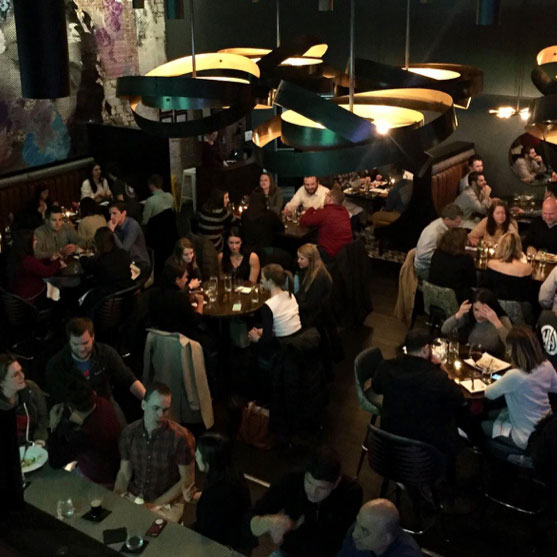 The Washington, DC Alumni Chapter partnered with JBC Events for a networking gathering on March 14, held at the Wilson Hardware restaurant and pub in Arlington, VA.

The Art of Behavior 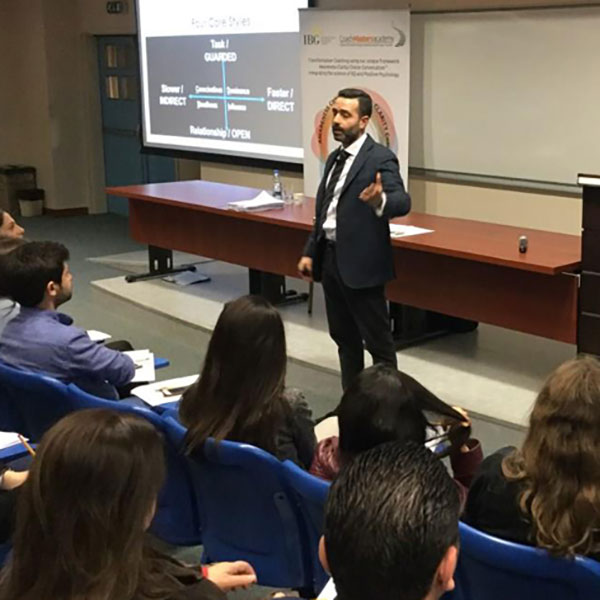 On March 15, alumnus and leadership coach Ihab Badawi gave a lecture called Mastering the Art of Behavior to a packed house on Beirut campus. The event was part of the Keep Learning Alumni Lecture Series. 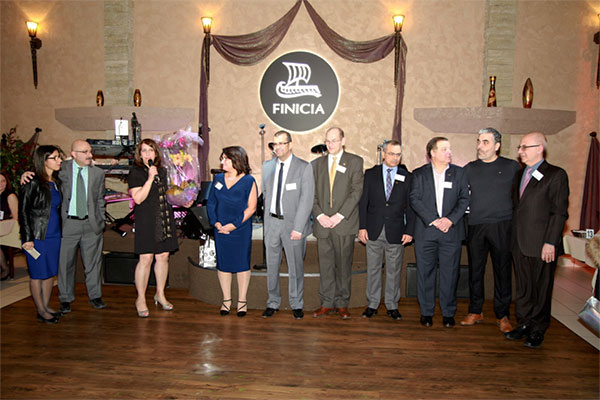 The FINICIA Modern Lebanese Kitchen was the location of the Toronto Chapter’s annual dinner, held on March 23. With over 70 alumni and friends in attendance, the dinner provided excellent food, live Middle Eastern music and a fun raffle.

In Honor of Dr. Jabbra 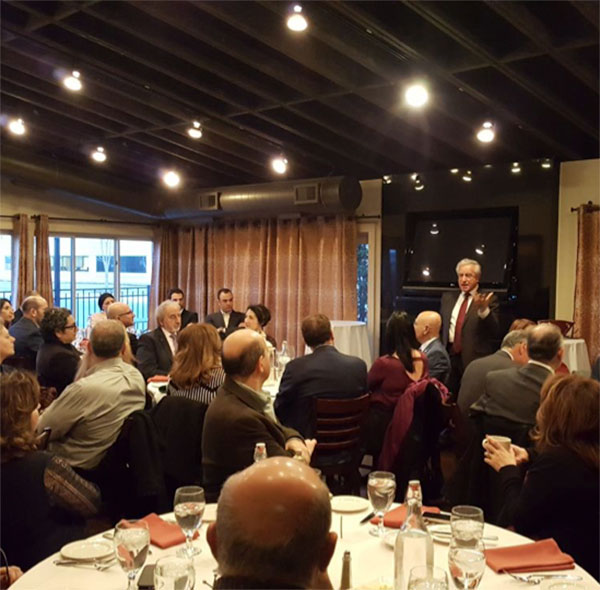 President Jabbra was the guest of honor at the Michigan Chapter’s dinner at the Andiamo Livonia restaurant on March 23.

Global strategic planning and implementation expert Mona Pearl was the guest of honor at a lecture on managing cross-cultural differences in business hosted by the Bahrain Chapter in Manama on April 11. The entrepreneur, author and consultant spoke to guests about driving intercultural teams toward success in a dynamic and diverse working environment.

A Blast from the Past 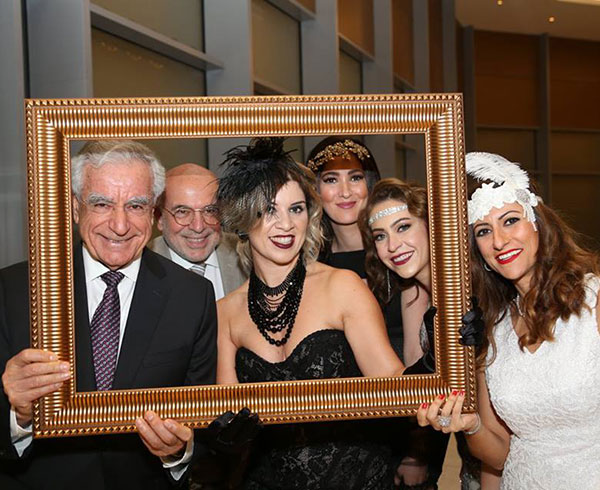 Members of the Oman Chapter convened at the exclusive Kempinski Hotel in Muscat for its 10th annual ball on April 20. The theme was A Blast from the Past, and the attendees certainly had a blast!

Good for Your Health 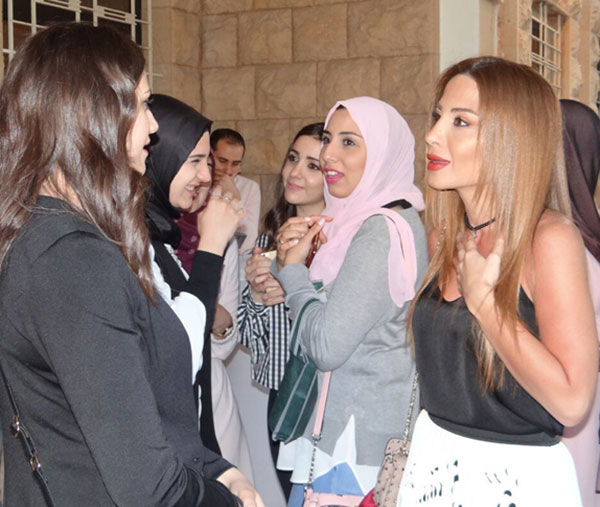 On April 23, dozens of former Nutrition Program students gathered at their alma mater to reconnect, network and muse over good times spent together as students. Dean of the School of Arts and Sciences Nashat Mansour told alumni, “No matter when you graduated or where you end up, we want to make sure you feel you are still part of the LAU family.” 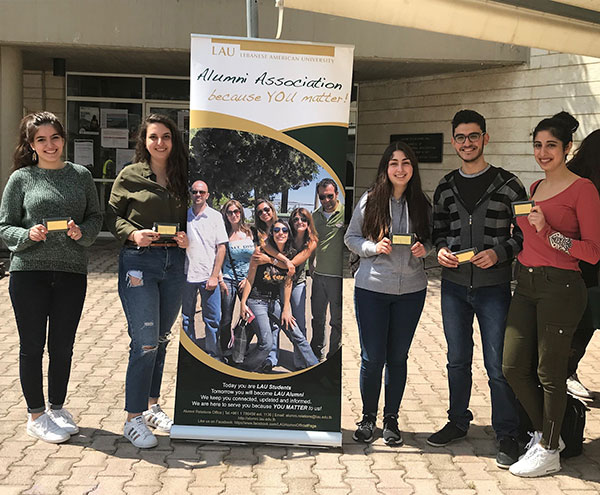 Final-year LAU students were treated to the Senior Student Orientation Event over two days on each campus this April. The Alumni Relations Office introduced the future graduates to the Alumni Association and taught them about the benefits of keeping up with their alma mater after commencement. The attendees – nearly 600 across the two campuses – enjoyed refreshments, and each received a leather business card holder with a brass plaque reading LAU Alumni Association Class of 2018 as a souvenir. 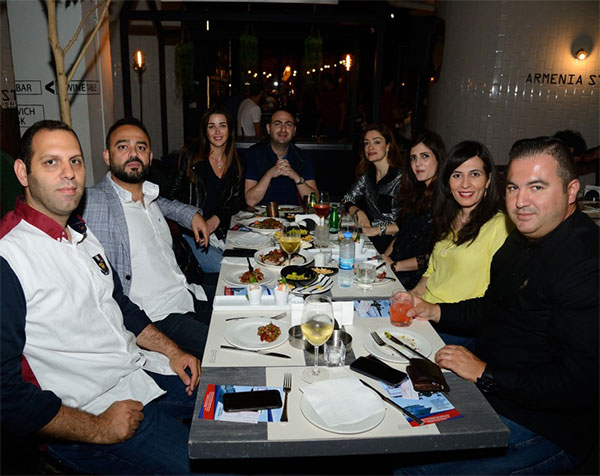 The Byblos Chapter organized their spring gathering at Memory Lane in the Beirut neighborhood of Mar Mikhael on April 28. More than 80 alumni and friends enjoyed the gathering. 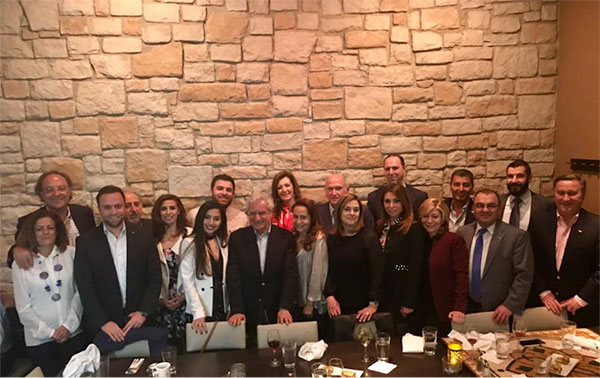 President Jabbra was the guest of honor at the DC Chapter’s dinner on May 3.

Back in Beirut on May 3, the Alumni Relations Office hosted its 12th annual Business Networking Reception in collaboration with the Offices of the Deans of Students. Around 300 people attended a lively panel discussion among HR representatives from leading local and international companies, moderated by Vice President of Human Resources and University Services Roy Majdalani.

The New England Alumni Chapter hosted a screening of Nour by LAU alumnus Khalil Dreyfus Zaarour at the Belmont Studio Cinema in Belmont, Massachusetts. Chapter members also enjoyed dinner together and wrapped up the night by celebrating Zaarour’s birthday.

Topping off a colorful week of workshops, performances, screenings, competitions and more, the closing ceremony of Festival Next brought into the spotlight renowned journalist, public figure and LAU alumna Rima Maktabi (BA ’00, MA ’03) at Gulbenkian Theatre on May 11. Maktabi was honored by the Communication Arts Department in collaboration with the Alumni Relations Office.

The Beirut Chapter organized its annual brunch at Boulevard Beirut with a special appearance from actor and LAU alumnus Tala Jurdi on May 12. More than 120 alumni and friends attended. 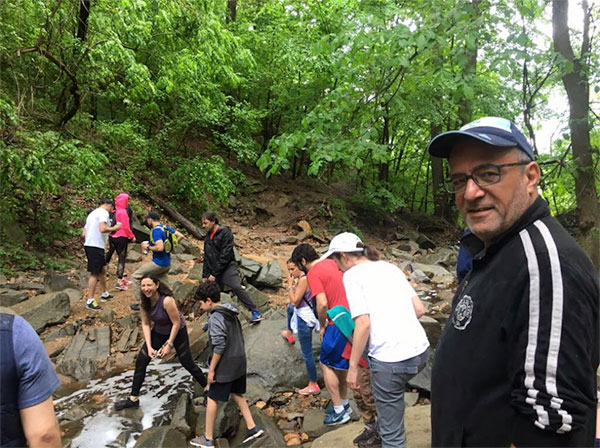 The DC Alumni Chapter joined American Friends of the Lebanon Mountain Trail and the House of Steep for a special Mother’s Day hike through Gulf Branch Park on May 13.

Also on May 13 was Alumni Athletics Day, organized jointly by the Alumni Relations Office and the Athletics Department. The event, which occurred on Beirut campus, included games of basketball, football, futsal, handball, tennis, table tennis and volleyball. It was a chance for former varsity athletes to come back to campus and play against their past classmates as well as with current student athletes.

Visiting LAU pharmacy students got a taste of Lebanese hospitality in the US when they and members of the Houston Chapter were invited to the home of alumna Tania Shaheen and her husband Wissam Tayssoun on May 22. The annual dinner is an opportunity to share memories, network and build lifelong connections.

The Bahrain Chapter organized a Ramadan ghabga – a local term for celebratory gathering – on May 24 at the Gulf Hotel’s Ramadan tent. Ghada Majed of the Alumni Office in Beirut joined for this year’s highly anticipated event.

Members of the Ottawa Chapter brought their family and friends to the newly renovated Ottawa Art Gallery on May 27.

Kuwait-based alumni gathered at the Symphony Style Hotel for their chapter’s Ramadan ghabga on May 29. The event gathered more than 180 alumni and friends.

The DC Chapter commemorated the holy month of Ramadan with an Iftar dinner on May 31.

Alumni from a group of private Lebanese universities – including LAU – gathered in Doha, Qatar, for the first-ever joint Ramadan suhour there on May 31. 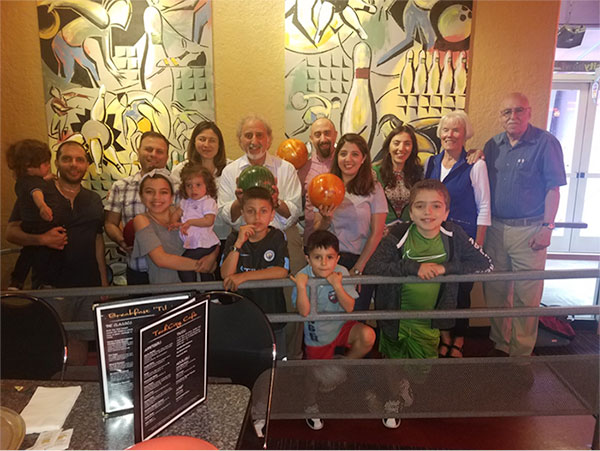 Over on the US West Coast, the Seattle Alumni Chapter spent the day searching for the perfect game at the TechCity Bowl and Family Fun Center on June 2.