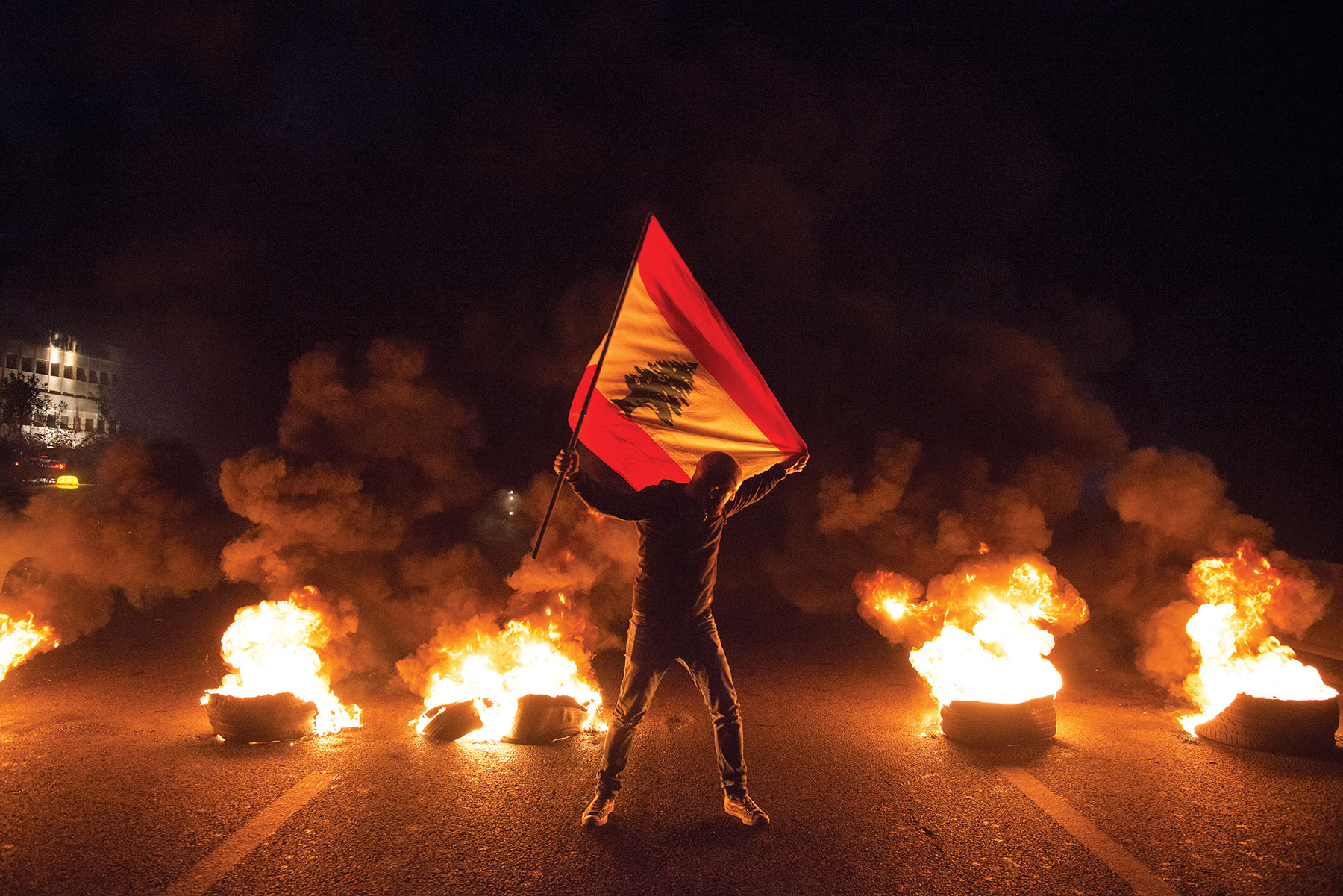 The “Revolution” and Generation Z 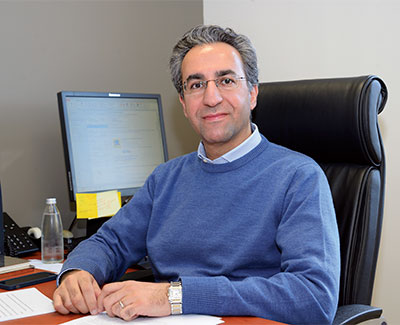 Dr. Bassel Salloukh is an associate professor of political science at LAU. His current research looks at post-conflict power-sharing arrangements, the challenge of re-assembling the political orders and societies of post-uprisings Arab states, and the geopolitics of the Middle East after the popular uprisings.

Would you characterize what’s been happening as an uprising, a revolution or a movement of popular protests?

I call it a revolution because the way the sectarian system is organized institutionally and ideologically, and at the level of its political economy, is meant to incentivize sectarian identities and ensure that these types of anti-sectarian protests do not emerge from outside the system.

But because the political economy of sectarianism has collapsed, and in the process led to the drying up of the clientelist swamps, people rebelled. This is what we saw on October 17.

Do you view targeting state institutions and the judiciary as a positive development, an indication that the protesters are becoming more organized?

I think so. We are dealing with a new generation, the late millennials and Generation Z, that the political elite doesn’t really understand, because it only knows clientelism, and works on the basis of “I give you state resources and state positions, and you give me loyalty.” But that is not the kind of imagination that Generation Z operates on. I think they are learning very quickly, drawing on lessons from previous uprisings.

At the outset it was very important that they block roads to shock the system, and to show their serious intent by bringing the country to a standstill. Beyond that, what they needed to do – which is what they are doing now ­– is to focus on the nodes of corruption in the system.

Generation Z has a better understanding of the horizontal dispersion of power in the system, and the need to use the same strategy in fighting it. We are not in Mubarak’s Egypt or Tunisia’s Ben Ali where the head can leave or step down. Power in the sectarian system is very dispersed, so you have to penetrate it strategically and, as Italian Marxist thinker and activist Antonio Gramsci would say, engage it in a long ‘war of position.’

Much more importantly, today’s protests are neither limited to Beirut nor are they interested in some kind of representation in government. Rather, they want to keep the political elite off guard.

The most important struggle now is to get the judiciary to assume its responsibilities.

Is a leaderless and horizontal revolution a point of strength and if so, could it become be a point of weakness?

On the contrary, I think this generation has learned a lot from the 2015 protests. I attend a lot of these talks in Martyrs’ Square, and you can see the generational difference between those old guard leftists who can only operate within an organized hierarchy and network, and this younger generation that simply refuses any kind of organization or leadership.

They have this very interesting strategy, where the thinking goes along the lines of “It is not my job to tell you [the government] to do one two three,” but “You are in power, you do your job, and I will hold you accountable.” This is a phenomenon that you see among this young generation globally.

But organization is inescapable, at least in preparing for the long-term battle against the sectarian system. How they will overcome this paradox will be a great challenge for this protest wave. But I think we are already seeing movement in the right direction, especially agreement on a set of clear, specific, and incremental objectives.

Granted that the grievances go much deeper than the WhatsApp tax, but didn’t the government see this coming with all the discontent that was being voiced?

This again goes back to the sectarian system, whereby the political-economic elite assume that they can take people for granted, having divided them along sectarian ‘streets’ – a disgusting term, one that assumes people are not citizens with rights and responsibilities. People are mobilized simply as members of sects and not along socio-economic grievances. It is in fact the very nature of the sectarian system to assume that people cannot mobilize along gender or socio-economic, regional, or environmental issues. That is why the government thought it could push further in the 2020 budget. This tells you something about the inability of those in power to see that they are dealing with citizens with rights and with dignity.

The political economic elite thought that it could keep doing what it was doing, but the importance of the WhatsApp tax was that it added insult to socio-economic misery. We know from research that you can push people socio-economically, but at some point something will trigger a sense of insult. In Chile, it was a hike in the metro price. It is the symbolism behind it that matters.

As a political scientist, did you foresee a people’s revolution?

If you go back to my op-ed “The Anatomy of Corruption in Postwar Lebanon,” published in May 2019 by The Lebanese Center for Policy Studies, you’ll notice that the question I was trying to grapple with was what will happen when the political economy of sectarianism reaches a dead end. What will happen when the clientelist swamps dry up? What’s more interesting is that in my Intro to Political Science class, I often ask my students to write a three-page op-ed piece, and coincidentally on Thursday October 17, we agreed that the question would be “Why do people rebel in certain places, but not in others?” Of course, the question in the back of our minds was why wasn’t there a revolution in Lebanon, why do you see it in Chile and in Algeria, but not in Lebanon?

This was a central question that people like myself were asking. We wanted to know where the protesters were, given the sharp income disparities and hard socio-economic conditions in the country.

The sectarian system in Lebanon, in your words is not “a house of cards and will not collapse overnight.” Are you optimistic?

Yes, very much so. These late millennials and Generation Zs have destroyed the taboos and walls of fear that were created by the sectarian system, and they have demystified sectarian demonization in the process.

I am much more optimistic about the future implications of what’s happening now than I was of other movements. They have already achieved many victories: they have declared the end of the civil war, on their terms; they have created a new imagined community beyond sectarianism; and they have reintegrated the peripheries into the country, Tripoli, Akkar and the South – places that were forgotten. They have demonstrated that there is a way of activism that is peaceful but that can really hurt the sectarian system.

Now, the challenge is to continue to put pressure on the system, and on those sites that generate accountability, but especially the judiciary. We have to help the judiciary, through popular pressure, to break free from the grip of the political economic elite.

So, you believe it has to start at the level of the institutions of different sectors.

Absolutely. And you keep the pressure and keep them on their guard as the protesters are doing. The 21st century is the century of counter revolutions. But the greatest achievement of this revolution so far is that they have changed the terms of the debate and the modes of mobilization. It is no longer about what the Sunnis, the Shia, the Christians or the Druze want; it is about who can stabilize the economy. Who can prevent monetary collapse? Who can manage the environmental crisis? Who can manage the pollution crisis?

The terms of the debate have completely changed. And that’s what you need to build on, because that’s how you destroy the hegemony of sectarianism in the long run.

Share this:
Back to top Op-Ed: A Rigid System Unable to Reform Itself Citizen Journalism vs Traditional Media on the Ground